We had just gotten into hydroponics through the Ikea VAEXER line of mini indoor hydroponic grow systems.

More on those maybe at a later stage, they are neat, really cool and get you hooked at healthy home growing. However they are not perfect so while researching more about Hydroponics I got to Aquaponics and the hook was properly set seeing all those peoples DIY setups made from cheap materials with amazing results.

Totally unrelated we went to a local Aquariumshop for a ponder and I saw the Brio35 on display.

Its a stunning looking off the shelf ready to go complete mini Aquaponics system that is actually incredibly well designed and just so good looking that I was immediately hooked hopelessly.  It just didnt let me go… Needless to say a few weeks later I was filling my own one up with water 😉

This is it here in our living room.

I really like the Brio35 due to its brilliant technical but also sleek visual design so it can stay in the living room and surely doesnt need to hide. This meant Aquascaping was important to make it look nice with dark gravel to pop the colors of plants and fish etc. Thats what hooked me so much that its stylish AND an aquaponic system.

I dont want to go into too much into tech detail on the Brio35 just to say that its only a 35L aquarium but it also has a fairly small grow (Ebb and Flow) area of about 20x26cm so its an okay match. There is no real point for a bigger grow area as you would have to put too many fish in the small tank to get enough waste.

This is the state about 2 weeks ago. Need to get better pictures its so damn bright these days 😉 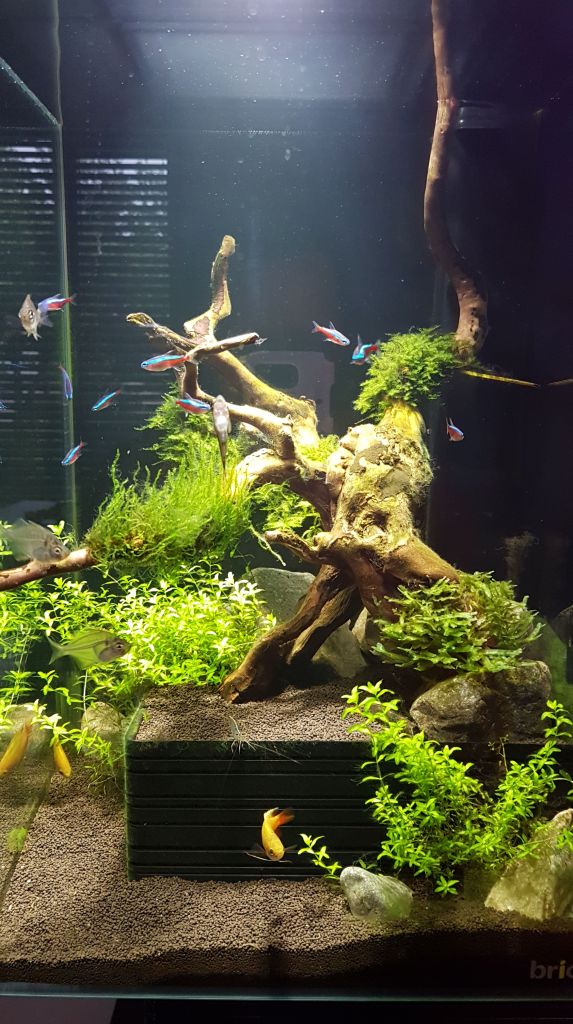 The Fish I stocking that make it all happen. Chosen mainly as they stay small, are not very aggressive and look nice.

Didnt want any fast growing plants inside the AQ as they would compete with the terrestrial plants in the growbed for nutrients. There is slow stuff like Flame-, Weeping and Christmasmoss, Pelia, Nana Valisnieria (rather growing backwards) but also the bushy plant in front and back left which is really thriving way too well now and has to go.

More excitingly the terrestrial Plants are 3 Strawberries (junebearers unfortunately) and a Red Chilli (F1 Medina). We have harvested about 9 delicious fruits from the Strawberries but I now found out that this breed of Strawberries only has Fruit once a year so I am not sure yet whats the plan with it. The Chilli is growing like crazy and has 3 large Fruit on it and several small ones. The Plant was bought at 10cm height and has at least tripled in size/volume! I am absolutely amazed by the size of those chillies and cant wait for them to turn red before harvest soon.

The Grow light is a bit too narrow of a beam and doesnt cover the growbed at all unless you grow no more than 5cm hieght plants. So I added some 120deg beam Spotlight in 6500k Daylight (see above). Also I am not a great fan of the purple growlights but I have gotten used to it now.

It wasnt an easy start I had some serious algea issues in the tank in the beginning (which is fairly normal for any aquarium during cycling) and high Nitrates/Nitrites battles but it has now settled very well. My main issue was due to the low-ish temperature the beneficial bacteria for breaking down Nitrites was growing much slower than expected. Now I am trying to maintain a slighty raised Nitrate level so the Chilli has enough food for the fruits.

As I was so amazed by this aquaponics system I was already wondering how to upsize such a system and grow all our greens inside the house all year around.

And so this Adventure started 🙂 … stay tuned