Progress in the build is going well but I am behind in writing so I have to jump forward a bit to today’s state and write up on some of the build later.

I couldnt wait to show the first temporary (all very messy) setup so here it is. 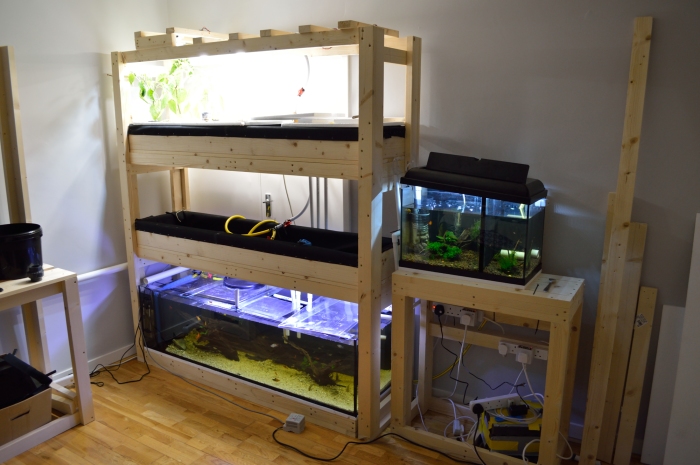 The initial Lighting on the top shelf is finished for now. There is 14 GU10 8W 4000K LED Spotlights (from SPECTRUM) fitted to the pieces of wood (2 Spotlights each) sitting on the very top of the shelf. 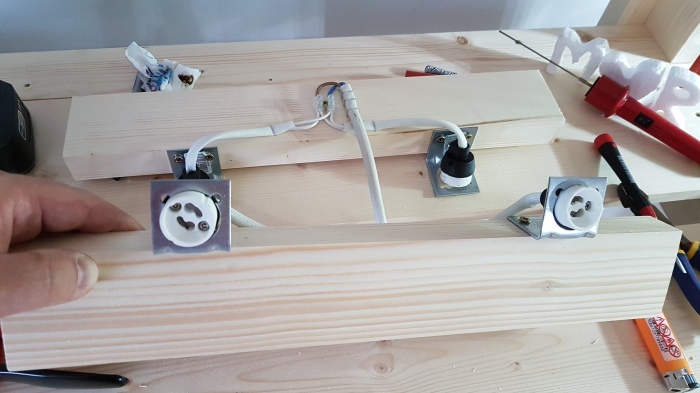 I may upgrade this in the future but since I am only planning on growing lettuces etc up there the light should be sufficient. However at the moment I have three bell peppers and the chilli from the Brio35 system up there waiting for the Bench to be ready. They are not doing too well right now as there was a lot of moving around, couple of days without water circulation etc so at this stage I am just happy they are still hanging in there. The Chilli has grown like crazy but once the three fruits have reached a certain size there seems to be no progress. Maybe the green fruit will not turn red as the label of the plant suggests and they are actually now ripe? I will leave them for another few weeks and see what happens. 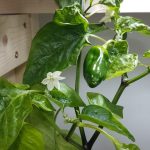 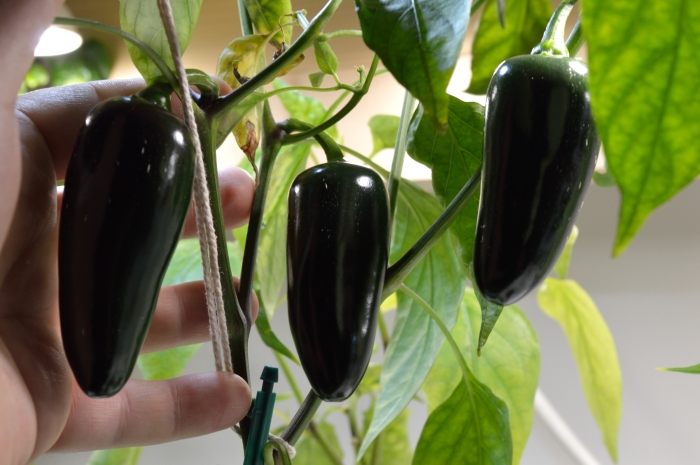 The middle Shelf is still on hold as I dont have the LED lights built yet. But the Bed as such is almost ready just needs a bit of plumbing finish up and the clay pebbels. Once I have the lights I will start setting this up as we cant wait to start planting this Growbed. Actually the LED PCB strips (LT-H282D) have arrived today and I am planning to start the build this weekend.

The 300L aquarium on the bottom is running well now since 2 weeks. I have used the temporary 60L tank that ran for 3 weeks prior to this to seed the bacteria into the now bigger system. 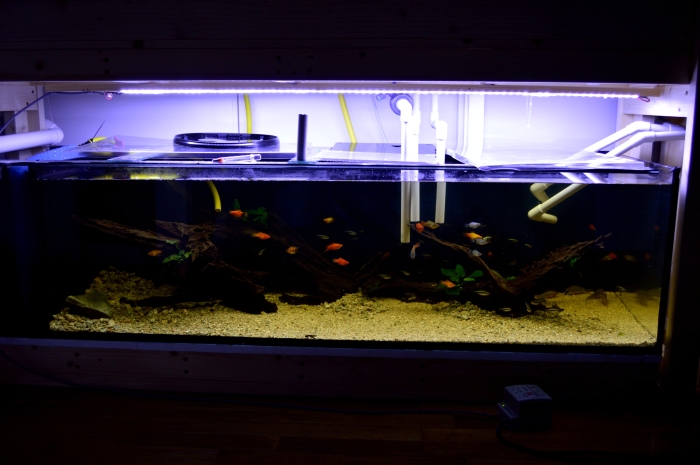 Excuse the picture quality it is almost impossible for me to take pictures of the tank due to all the lights everywhere and the reflections of them on the floor. Also the water is extremely murky from the roots tannin’s and the Aquarium lighting is only temporary and way to cold (in K) for my liking. The Plumbing is all temporary and will eventually all be hidden in the right hand side corner.

I used granite gravel in various grain sizes from 1.5-10mm from a local beach, very well washed and left to soak 24h before adding it. There are of course plenty of broken shells in there that will raise the pH in theory however so far the pH has dropped from 7.9 to 7.5 so its going the right way. Just didnt want to buy gravel so this was the only option. I really wanted much darker substrate but any other gravel I found locally that was darker was limestone based and that would drastically raise the pH. The balance between ideal pH for the plants AND for the fish here is around pH 6.5 – 7.

The Stock of the System at the moment is as below. I have gradually expanded this over the last 2-3 weeks to prevent any spikes of Ammonia and Nitrites. So far everything has been very stable.

Just did some tests today…

Stock as of now

Another 30 Platies will be added this weekend but then thats it, everything from then on has to be home bred! The Neons werent part of the plan but some friends kindly offered them together with 5 Bronze Corys, Siamese Algea Eaters and some Amanos. They are actually amazing to watch as they sometimes all school together and sweep the whole length of the tank and around the roots. Very enjoyable and relaxing to watch them next to the rather chaotic Platies.

Its surprising but also a bit worrying that with all these fish and fairly heavy feeding about 4 times a day I still have zero Nitrates. Its very good for the fish but I am a bit worried that i will never be able to produce enough food for the plants. We will see. There is still plenty of space in the tank for more fish (hopefully from offspring)

This 60L Tank on the right of the shelf was the temporary tank from the very first trials and is still part of the system for the moment. I am using it to house birthing females. This is to increase the yield of live offspring as they would otherwise all the eaten by the other fish. For those who didnt know that, Yep, nature is savage 😉 On the RHS of this 60L I have an area baffled off where I have a colony of about 30 Red Cherry shrimp that will also breed and multiply fairly quickly, fingers crossed.

Thats it for now , I hope to get some better pictures of the Aquarium and more updates soon.